Let's discover the world’s largest shipping companies by TEU and their vast fleets of container ships.

Container Shipping is one of the most important and necessary means of transporting cargo by sea routes. However, in the present time there is no monopoly by any of the container shipping companies which leads to a complete lack of friction and tension in the international cargo shipping community.

7) Evergreen Marine Corp.
Evergreen Marine is the world's seventh largest shipping company with a capacity of over TEU 1.3 million (5.4%market share). It was established in 1968 and has a fleet of 200 container ships and headquarters in Taoyuan City, Taiwan.

6) Ocean Network Express (ONE)
ONE is a Japanese company with headquarters in Singapore, which was established on 7 July 2017 following the amalgamation of Nippon Yusen Kaisha, K Line and Mitsui O.S.K. Lines.  The company has a 222 vessel fleet and a 1.6 million TEU capacity (6.7% market share).

5) Hapag-Lloyd
Hapag-Lloyd originally formed following the merger of Amerikanische Packetfahrt-Actien-Gesellschaft (HAPAG) and Norddeutscher Lloyd (NDL). In 2014, it become a German-Chilean owned conglomerate and the world's fifth largest shipping company. The company has 236 vessels, and a capacity of 1.7 million TEU (7.4% market share).

4) CMA CGM Group
CMA CGM S.A. is a French shipping company which was founded in 1996. The company is now the fourth largest shipping company in the world. CMA CGM has 492 vessels and a TEU capacity of 2.7 million (11.4% market share).

3) COSCO
An acronym for China Ocean Shipping (Group) Company, COSCO is a state-owned Chinese carrier with headquarters in Beijing. COSCO has a market share of 12.5% with a combined TEU capacity of 2.9 million across 503 container ships.

2)Mediterranean Shipping Company
MSC is an Italian shipping company, known across the globe as a container shipping heavyweight and cruise liner operator. The company has a 566 strong fleet with a capacity of 3.8 million TEU (16% market share).

1)A.P. Moller–Maersk Group
It is a Danish business conglomerate and the world’s largest container shipping company. Boasting a global workforce of 76,000 employees across 130 countries, the behemothic carrier has an armada of vessels (707) which call on 343 ports worldwide. Maersk has a TEU capacity of 4.2 million (17.7% market share). 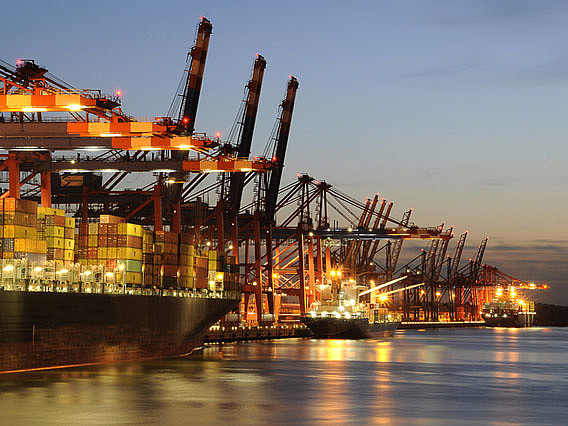 Port of Hamburg to use solar-powered mooring systems