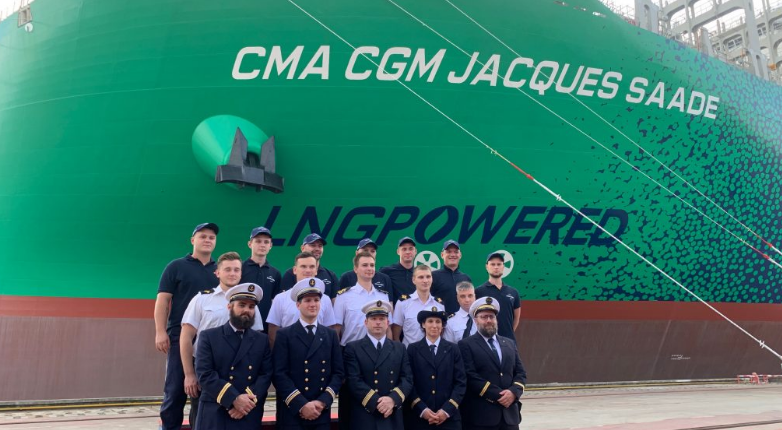 Blessed by Father Francis Fang, the vessel was then officially named by his godmother, Tanya Saadé Zeenny, who, with the traditional words "May God bless this ship and all who will sail on it," wished the ship, the captain and its crew the best of luck on their future voyages.

A symbolic decision was made by the French company to name its new flagship after its founder, Jacques Saadé.

“The CMA CGM Jacques Saadé embodies our commitment to the planet. This vessel has been enhanced with the latest technologies and is the result of 7 years of research and development. While guaranteeing the safety of our crew, it preserves air quality and will be part of our fight against global warming. It significantly improves the environmental footprint of carried goods,” Rodolphe Saadé, Chairman and Chief Executive Officer stated.

The LNG-powered boxship, launched a year ago, is the first in a series of nine 23,000 TEU newbuilds ordered by CMA CGM. It is 400 meters long, 61 meters wide and can sail at a service speed of 22 knots.

The French Foreign Registry (FIR) will registry all nine container vessels. They will bear the names of Parisian landmarks and other famous venues and institutions from the Champs Elysées, Palais Royal, Louvre, Rivoli, Montmartre, Concorde, Trocadéro, and Sorbonne, in the French capital.

The CMA CGM Jacques Saade will begin its maiden voyage on the French Asia Line (FAL), the most emblematic line of the CMA CGM Group between Asia and Northern Europe, on 23 September.